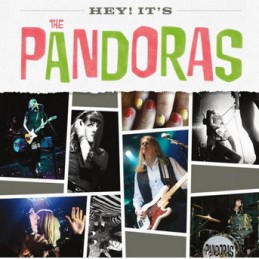 Holy crap! A reconstituted Pandoras, recording for the first time in 29 years (eek!) under the name, came out this week!

It leads off with a cover of “It’s Getting Harder All The Time,” an old Wayne Fontana tune, and then launches into a mini-set of songs penned by original Pandora’s founder Paula Pierce, who died in 1991.

Kim Shattuck and Melanie Vammen, who had left the original Pandoras long ago to form The Muffs, a great band Shattuck has been fronting since, team up with bassist Karen Basset and drummer Hillary Burton for what’s basically an album side of some great power pop/punk-ish stuff. Shattuck tones down her Muffs’ style screams and growls a bit here, and Vammen’s farfisas underscore throughout.

The Pandoras got less pop/punk and more hard rock after Shattuck & Vammen departed, and the songs they do here are from the earlier (and better, imo) period.

Listening to this was a nice reminder of ’80s music I liked a lot.

So is it a rebirth of the band? Will they go on to produce new material? Or is it basically a mini-reunion and tribute to Pierce?

It’s a great 22 minutes, but I hope it’s the beginning of new material getting produced.

Get it here!  Yeah yeah, it’s also on iTunes and Amazon and all the rest, too.