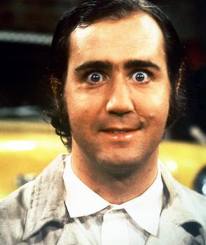 No, not THAT Latka.

Whenever a Jew holiday rolls around, I inevitably think of potato latkes.

The magical taste of fried potato, and not just the lightly-French-Fried variety… no… this is deep brown crispy golden serious kettle cooked potato chip type frying. It’s what makes it all so so much better.

I’ve tried a few different recipes, but when I thought about the subtleties of what separates the good latke from the great, it all came down to some very simple stuff. Great latkes were bigger & spongier, basically, offering a better interior texture than something that felt more like deep fried mashed potatoes.

So the secret is…. hand shred the potatoes using a box grater. Do NOT use a food processor. I don’t care how much easier it might sound. DO NOT DO IT.

The baking powder/hot sauce or vinegar combo will give you some rising action when you cook them, the interweaving shreds of hand-chopped potato & slightly translucent onion cooked inside give you a great inner texture – you get a smooth & creamy potato flavor, but with some bite…. I guess you could call it “al dente.” And you get the wonderful dark brown crispy fried potato goodness on the outside.

And for me, the hint of hot pepper flavor in ’em with the Cholula combined with the sour cream & onion makes it all very very nice indeed.

And am I the only one out here who thinks that giving chocolate coins to Jewish kids on Hanukkah only confirms a Jewish stereotype? Back when I was a kid, I far preferred the Milton Bradley “Control The Media” board game, myself.

I think the Maccabees did, too. Now eat, bubelah, eat!