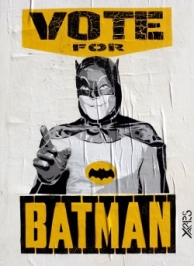 The message is: You’re not changing anyone’s mind.

It doesn’t take a university-sponsored cyber-anthropological study to figure this out.  Look at any Facebook political post on your newsfeed, and you’ll see the exact same repeating pattern:

What I’ve noticed looking at my own newsfeed & after some random browsings of the walls of my more politically activist Facebook friends is that what’s going on is not a debate where someone is trying to convince someone else to adopt a new point of view, or consider new evidence, or rethink an issue. What’s going on is merely the public preening of viewpoint in search of reassuring pats on the back from the safely & comfortably like-minded.

It reminds me of another pet peeve of mine as a film maven. From the time I’ve been in college ’til now, whenever attending a public screening of some old classic movie. At some point, someone in that digitally preserved 1930s world on the screen would spout a line of dialogue ill befitting our own so-enlightened era – they’d describe something as “woman’s work” or whatever – I remember it happening during a screening of the 1936 original Mr. Deeds Goes To Town when someone discusses how “women think differently” – and inevitably someone in the audience would hiss the movie.

Will the characters in the movie change their attitudes from audience reaction? Are we actually all living in The Purple Rose Of Cairo? Well, no, of course not. There’s absolutely no reason for the hiss except for the mere public demonstration involved – a way of standing up amongst an audience of peers and shouting “I AM PROPERLY ENLIGHTENED!”  without actually getting up and shouting words since there’s a movie playing.

Granted, if the guy hissing only does so in order to con his date into thinking of him as a sensitive beta-male & it gets her to put out, I guess I can forgive him. Otherwise, my reaction is always the same: SHUT THE F UP.

Yes, I know many social attitudes of decades ago are worse than now. Gee, thanks for adding an exclamation point to it. Without the hiss, I’d have NO idea. Thank you SO FRIGGIN MUCH FOR GUIDING ME AS TO PROPER BEHAVIOR. I need to start taking notes., thank you OH so much.

I’m actually more interested in seeing the social attitudes & behaviors in old movies that are the same or close to the same as they are today, despite decades of change. But that’s another story & can always turn up later on one of my regular movie blog posts. Yay!

Those Facebook political posts are the equivalent of those movie hisses:  public preening of opinions safely held within your social circle in search of positive emotional reinforcement. Your Facebook feed IS your social circle, by its very definition.  Chances are if you’re like most people, the majority of your social circle tilts towards your own political beliefs. If you’ve moved in the sorts of social circles I have for most of my life – academia & Hollywood…. well, you can now imagine the tilt of my Facebook newsfeed.

That’s why I started thinking about this – I looked at the endless postings by the same three or four friends in my newsfeed & who regularly commented on them, and realized – These people are only talking amongst themselves.  They’re all reassuring each other that they are in the right, a lot like the macrobiotic cooking group I saw one time all trying to reassure each other how delicious the bland cardboard drek I was eating with them tasted. And it’s not a phenomenon for one ideology as opposed to another – browsing the walls of people with vastly different political stances illustrated the exact same pattern.

I’m sure there’s a social psych study out there somewhere about this.

It certainly makes sense when you stop and consider how friendships form & how networks of friends would only remain networks if certain kinds of consistencies in attitudes were present.

Posting political material on Facebook thinking you’ll change someone’s mind is like standing up in temple on Yom Kippur to shout the ten commandments thinking you’ll convert someone in the place to Judaism.

And (ahem) I noticed this myself when I posted political material or took it upon myself to comment on others; whether in agreement or in opposition. After a while I had my epiphany, seeing how pointless it was.  Although I will still engage people in political discussion or commentary on Facebook as in real life… and THAT’S the key.

I’ll talk about this stuff with friends on Facebook the way I do in real life. When there’s listening, no shouting, and a respectful attitude all around. It’s where you can shush someone for hissing during a movie because hissing is, well, bad audience manners, unless Snidely Whiplash is on screen.

So, to sum up: No one cares what you think unless they are insecure & are thinking it already. Facebook posts don’t change anyone’s minds.

And that goes DOUBLE for all those baby pictures. I don’t care how adorable your little darling is when he/she sleeps, craps or points to their bellybutton. It’s not convincing me to run out & have kids any more than the pic you shared of some protester’s sign has changed my mind about the issues of the day.

Either way, I’m tuning you out, opening a cold beer & petting my cat. (Sans beer on Yom Kippur… I don’t want to upset Sandy Koufax.)