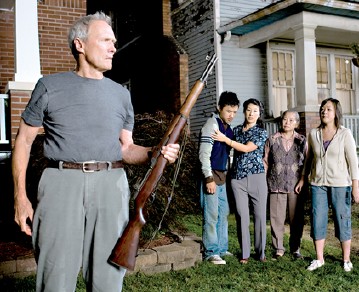 Clint Eastwood’s latest, Gran Torino, features Eastwood as Walt Kowalski, a cranky old racist widower living in his old Detroit neighborhood who winds up taking a Hmong teenage neighbor under his tutelage in the fine art of manning up after the kid tries stealing his vintage 1972 Gran Torino as a gang initiation.

Much like in Eastwood’s Million Dollar Baby, the majority of the first two thirds of this film play basically as a comedy, with the most entertaining moments arising from Clint’s racist litany of insults and macho bullying to those around him, where he seems to be channeling Don Rickles half the time. The final portion of the movie turns serious (much like Baby), where Clint’s character faces up to the anger inside him and ultimately leads to a genuine redemption. While a very simple story and one that unfolds rather matter-of-fact, Gran Torino touches on a lot of interesting cultural buttons as it goes along.

Since Kowalski is one of those guys with a garage full of tools who mows his own lawn and takes care of his own property, he can’t understand a world where the young men he sees are either thugs or pussies, in his eyes. What intrigues him about the would-be car thief next door, Tao (Bee Vang), is the kid’s willingness to atone for his actions, as well as a telling scene of Clint observing several young men ignoring and then obscenely insulting a woman whose groceries fall out of her bags into the street before Tao crosses the street to help her. Clint tries to teach him about tools, about finding a job, about the art of guy talk (basically how to insult each other obscenely in an affectionate way, which seems to be the main way Kowalski can demonstrate affection for anyone), and most importantly, about the true meaning of violence in a man’s life. When Tao wants to avenge the gang that has been harassing him throughout the film, Kowalski’s burdens of his Korean War past shape his actions in a manner that fits in with many of Eastwood’s recent films that deal with the impact and long-term effects of violence in people’s lives, whether it was Unforgiven, Mystic River, or his two Iwo Jima films. That’s what ultimately makes this a worthwhile picture for every guy out there to see – manning up does not mean loading up on a zillion guns Matrix-style or battling villains with superhero technology – in the real world, it means honestly confronting the appropriateness of violence and your own abilities in living with the real consequences for it, often for decades.

In a lot of ways this movie would make a great double bill with another film that asks the question of “What does it mean to be a man?”, The Man Who Shot Liberty Valence, and I suppose if you substitute Daffy Duck’s “lawless western town” for Detroit and a champion horse for the ’72 Torino you’d basically have a western here, although perhaps one with more of a Peckinpaugh-Wild Bunch vibe centering around an angry relic of an earlier age decrying the loss of codes of behavior that once meant everything but now were forgotten. In one of the best scenes in Gran Torino, Clint rescues Tao’s sister Sue (Ahny Her) from a trio of black teenaged street thugs who have scared off her white hip-hop wannabe boyfriend Trey (ironically played by Eastwood’s real life son Scott). After waving a gun at them Dirty Harry style, evoking all the racial connotations that were satirically skewered in Robert Townsend’s Hollywood Shuffle, Kowalski berates the thugs for basically being assholes, but then goes off on Trey for acting cowardly and pretty much being a walking insult to the three thugs – and since the gang realizes they agree with Clint, they seem to show a strange sort of respect for the racist old bastard as he drives away. It’s a wonderful demonstration of how guys seem to naturally understand traditional codes of manly behavior, but only after being shown by demonstration. Guys hunger to be shown these things. And without such proper role modeling, guys degenerate into thugs or pussies, evidently.

CLINT WILL LIGHT THE WAY!!!

The movies that feature male characters who embody those traditional modes of behavior – honor, bravery, sacrifice, common courtesy, drinking, swearing, do-it-yourself, guns, sports, cars, etc. – seem to do very very well at the box office. It’s that guy hunger, I guess. So perhaps inbetween all the Frank Miller-ed up comic book manna-for-the-fan-boys movies (yes, they showed the Watchmen trailer with this one) where the only people who have those things also have super-powers!, maybe we could have stories of real people who stand up for what’s right, even if they’re cantankerous old shotgun-wielding racist bastards. Then perhaps fan-boys could learn how to be fan-men.

Yeah, yeah, I know I liked Dark Knight & Iron Man & Hellboy, but I’m pretty much sick of this never-ending tsunami of comic book superhero movies. They’re running out of superheroes worth doing, let’s face it. But that’s a rant for another time.